“A good man is hard to find, so is a good friend”.

Tommy and I have been friends from childhood and we enjoyed each other company a lot, I guess, that’s the reason why we hang out a lot, sometimes with our girl friends together but lately Tom left for New York. i heard he got a job there.

The year is coming to an end and my friend Tommy has been asking me to pay him a visit, I took a flight to New York. Where I met tom and we were happy to see each other, we talked about the old times. Soon, it was evening then Tom decided to take me on a tour of New York.

Whether you are visiting New York for the first time or the hundredth, the Night On The Town Tour was the perfect way to experience many of the popular sites while indulging in some local activities. With the various attractions, we saw wonderful sites which truly captured our heart and made it an excursion to remember.

Viewing the bright lights of the city of New York on this night, we treated ourself to unforgettable views of the lit marquees in the theater District and the light displays at the top of the Empire State Building and the new One World Trade Center. After passing through Greenwich Village, Chinatown, Little Italy and into Brooklyn, I experienced the spectacular views of the illuminated skyline and its sparkling reflection along the East River.

Along with many of the common city sites, including the Empire State Building, Madison Square Garden, Central Park, Radio City Music Hall, Madame Tussauds, FAO Schwartz, Hard Rock Café and Katz Deli, we also had a chance to experience other grand attractions that are not as well known. Malcolm Shabazz Harlem Market will tantalize your eyes and your pocket, With the love and support that is exuded from the Hale House Center. You can also take a moment of silence to remember those lost at the Ground Zero site and museum workshop.

As we went about our night tour we were able to experience the different aspects of the city in unique ways. I was feeling like a true VIP as we viewed the lavishly accentuated sites of Tiffany & Co., the Marriott Marquis, Macy’s, the Plaza Hotel and other high class establishments. Enjoy the New York Stock Exchange, City Hall, the Federal Reserve Bank, the Flat Iron Building, the Metropolitan Life Building and other notable business centers without the rush of the daily hustle and bustle. We Admired the fine craftsmanship and care put into maintaining many of the museums and historical sites, including the Guggenheim Museum, the American Museum of Natural History, the Metropolitan Museum of Art, the Cathedral of Saint John the Divine, Carnegie Hall and more. 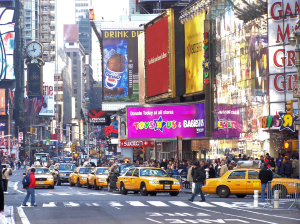 The tour was loosely composed of a bus tour, a tour of High Line Park, a harbor cruise complete with a champagne toast, an authentic New York dinner in gorgeous Little Italy and a stent on the observation deck of the “Top of the Rock,” the top of Rockefeller Center. As we participated in these different activities we got the chance to view many other attractions around the city.

It was a night to remember and I made Tom aware that I will love to come around next time for a visit. What a wonderful night in New York.